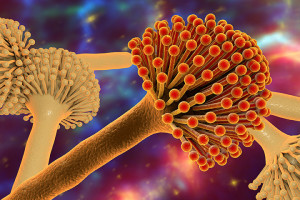 There are many mold toxins that can cause health problems, particularly the Aflatoxins, Ochratoxins, Safratoxins, Gliotoxins, and Tricothecenes, which have the ability to interfere with detoxification. They overload the detoxification mechanisms, which eventually increases chemical sensitivity. There are also a number of mold toxins that can produce cancer, which is due to their ability to disrupt or damage DNA, RNA, and Organelle function. This in turn produces a profound effect on DNA and protein synthesis leading to inadequate nutrient stores, which are necessary for detoxification. Mold toxins can have a significant effect on protein inhibition by creating a toxic effect on mitochondrial function producing damage, which eventually leads to fatigue. There is also Amino Acid wasting (weight loss) due to mold toxin exposure. Mold mycotoxins have direct immunosuppressive action due to their effect on T-suppressor cells. There may also be an indirect effect on T4 helper cells, B-cells, and Macrophages. Some mold toxins have tremorgenic properties, particularly those within the Penicillium species. The effects of mold toxins can have future deleterious health effects. There are a number of articles and experiments that show fatty degeneration of organ systems, particularly of the liver. This degeneration can produce complications including Cirrhosis, Reye’s Syndrome, and cancer. Mold toxins can have a direct effect on the myocardium as well as the peripheral blood vessels, which can be life threatening if left untreated. The peripheral blood vessel involvement may present as cold hands, cold feet, and spontaneous bruising and swelling to the point of gangrene and acneiform skin lesions. Molds and mold toxins can also produce nervous system dysfunction due to inflammation or neurotoxicity manifesting as symptoms of short-term memory loss, an inability to concentrate, disorientation, and vertigo.

Because of the complex nature of this condition, it is important to keep in mind the concept of total load or the total environment. Individuals often experience lowered resistance to disease as a result of the depletion of their nutrient pool brought on by mold exposure. They may then develop chronic symptoms of ill health such as symptoms associated with neurocognitive dysfunction, gastrointestinal disturbances, cardiovascular anomalies, immune system dysregulation, chronic and recurrent upper respiratory infections, chronic fatigue, and fibromyalgia. If these people are later exposed to ambient levels of toxic molds, they may experience additional and/or enhanced symptoms. “Spreading” which can involve both new organ systems and increased sensitivities to additional substances, may occur.

Mold exposure can lead to a very progressive disease process. It is imperative that evaluation and treatment be initiated immediately in order to avoid a more life-threatening and often irreversible medical condition.

REFERENCES for Neurotoxic Effects of Mold and Mycotoxins

References for Immunotoxicity secondary to mold and mycotoxin exposure

The diagnostic approach includes the following: